Hannah Soar remembers when she and her best friend Olivia Giaccio did back flips with full twists into an air bag at Killington Resort around age 11.

“We were doing such bad back fulls, but we were pushing each other,” Soar said. “We wanted to push female mogul skiing.”

Even as kids, they wanted to take their tricks to the World Cup tour.  They both made the U.S. Ski Team the same year in high school. Now, Giaccio, 19 and Soar, 20, are two of the only women on the World Cup tour doing full twists and corks down mogul courses.

“We both did it and we did it together,” Soar said. “That’s one thing that really happened—her being by my side.”

Soar, who graduated from Killington Mountain School, just landed her first podium last month when she took third in a dual moguls FIS World Cup event in China on Dec. 15, 2019.

“It was definitely a cool experience,” Soar said. 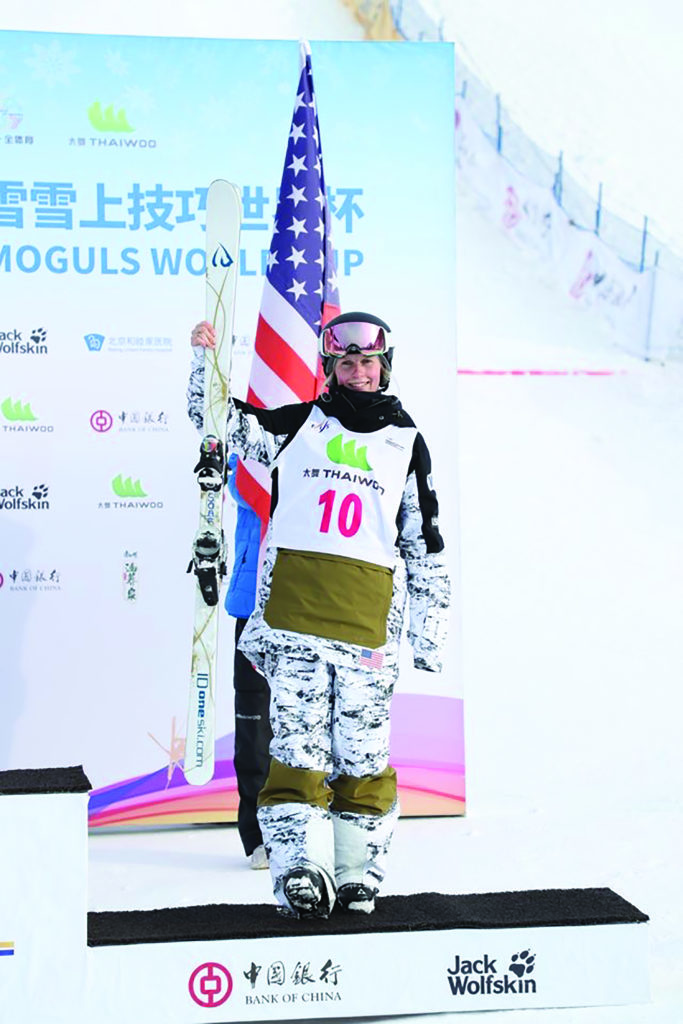 This is only Soar’s second season competing on the World Cup tour, but she’s establishing herself as a top competitor for the U.S. team.  Last Saturday, Jan. 11, Soar won the U.S. Ski Team selections in Colorado.

Soar attributes much of her success to skiing in Killington.

“KMS teaches you to be a skier and to just love skiing and just find that passion,” she said. “A lot of other programs manufacture mogul skiing.”

Despite her hectic travel schedule, Soar returns to Killington every chance she gets. While on brief break from the World Cup between events, she spent Martin Luther King weekend in Killington skiing on the Outer Limits trail.

“The Killington community is probably the biggest thing,” she said. “It inspires me to want to go out on the World Cup and represent Killington.”

Growing up, Soar said she was never pushed to be a competitive skier, but it was part of her upbringing.

Soar grew up in Connecticut and visited Killington to ski every weekend with her family—avid mogul skiers.

Soar qualified for the national team during her junior year of high school with Giaccio, who’s a year younger.

“It was hard because I made the U.S. team a little early,” she said. “I don’t think I was quite ready at that point. The U.S. Ski team was older and a lot better than me.”

Soar wore the U.S. Ski Team jacket and went to the training camps, but continued to train with the KMS program.

“That’s where I was more comfortable,” she said. “I had such a good group at KMS.”

Two of her best friends from KMS—Kalman Heims and Alex Lewis—also compete in moguls on the men’s side.

All three of them were in Killington to free-ski during Martin Luther King weekend and work out at the KMS gym before traveling to the next World Cup event at Mont-Tremblant in Quebec, Canada, on Saturday, Jan. 25.

Soar said she and Giaccio continue to push each other as they did as kids.

On the day she got on the podium in China, Soar said everything went wrong.

“I didn’t sleep at all that night,” she said.

Giaccio fell the morning of the event in training and tore her anterior cruciate ligament.

“I watched her tear her ACL right before my first dual,” Soar said. “ I was an emotional mess. I was in tears and my coach was like, ‘Olivia would want you to ski for her.’ What I have to remember for the future—even though I was  an emotional wreck—I was able to … focus on what I needed to do to succeed.”

Soar hopes for another podium this year in moguls. She said everything she does now is geared toward the 2022 Olympics in Beijing.

Foliage update: It’s staring to look a lot like

Happy Autumnal Equinox! Sugar and Spice is all dre

The forest Fire on Deep Leap is fully contained, b

Careless campers set Deer Leap on fire with a camp

One perfect pink dahlia, cause it’s Friday and y

The western smoke has made it all the way to Vermo

Now issue out today! In this paper: @killingtonmtn

A backyard bear enjoys the crab apple bounty in Ki

While it is truly heartbreaking to watch the West

The Mountain Times is in Killington, Vermont.

Pick up a copy of the paper this week and read all about the new regulations for inns and hotels, as well as school sports. The fire on Deer Leap smolders, while the legislature wraps up its session, and America mourns the loss of Rutland Bader Ginsburg. Plus a long list of events, puzzles, classifieds, horoscopes and more! #LocalNews #newspaper #deerleap #vermont #killington #mountaintimes ... See MoreSee Less

The Mountain Times is feeling fed up at Dear Leap Trail.

Perhaps the most insane part of this whole saga is that on Monday (three days after the this fire started), a group of six people walked right past the Forest Service and proceeded to light off fireworks and have a camp fire in the area!
🔥 🧨 💥 ... See MoreSee Less

Forest fire on Deer Leap is ‘under control’ - The Mountain Times

As we continue to safely reopen our economy, there are many career opportunities across the state for Vermonters who are ready to get back to work.

The Mountain Times is in Killington, Vermont.

Foliage update: It’s staring to look a lot like fall around these parts. A couple more warm days and then hopefully we’ll get some colder temps and much needed rain that will make the colors start to really pop! Still time to plan a visit, with Inns now open 100% in Vermont. 🍁Please wear your mask! #foliage #fallfoliage #vermont #killington #fallcolors ... See MoreSee Less