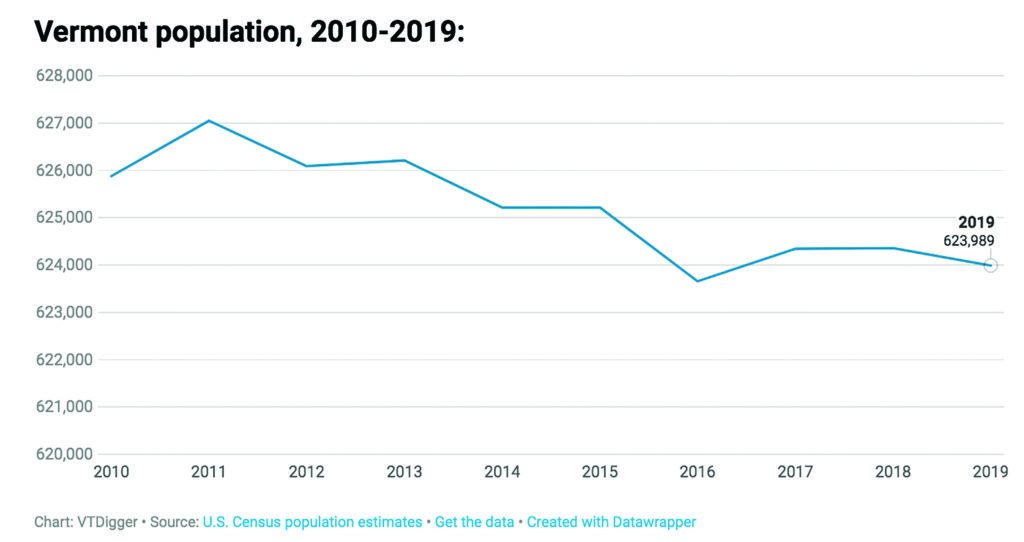 The U.S. Census Bureau’s most recent population report shows that each year since 2016, Vermont has experienced more deaths than births.

On a percentage basis, Vermont’s 0.06% decline from 2018 to 2019 ranked it 42nd in the nation, which means only eight states grew more slowly than Vermont. By contrast, the U.S. population increased by 0.5%, the smallest increase since 1918.

Some of the highlights of the Census Bureau’s report include:

In each year since 2016, Vermont has experienced more deaths than births. That means Vermont has a negative rate of what demographers call the “natural rate of increase.” That could be the first time this has happened in Vermont’s history. Given the aging of the Baby Boom generation and the falling number of women in their prime child-bearing years, that trend will continue into the foreseeable future.

For the 10th consecutive year, more people have moved out of Vermont to other states than moved in. Last year, about 700 more people left the state than arrived, which at least isn’t as bad as it was in mid-decade, when the net out-migration sometimes exceeded 2,000 each year.

If current trends continue, and if the Census Bureau estimates for the past nine years are correct, when the 2020 Census count numbers are released sometime in late 2020, Vermont’s population will be less than it was in 2010.

The last time Vermont’s population dropped between two censuses was in 1940, when Vermont had 400 fewer residents than in 1930. Of course, the Great Depression of the 1930s caused massive economic dislocation across the country, and Vermont was not immune from its effects as many Vermonters left trying to find work elsewhere.

Before that, in Vermont’s entire 230-year history, only the 1910s witnessed a population decline. That decline, exactly one century ago, was when the Spanish flu pandemic of 1918 ravaged the world, killing 50 million to 100 million people worldwide (more than died in World War I), more than one-half million in the U.S., and about 2,000 Vermonters, contributing to the state’s population decline. In addition, many rural Vermonters no doubt left the grinding poverty of hill farms and moved to urban areas of southern New England and elsewhere to work in war production factories. But the current decade-long population decline is different, occurring when the economy is healthy and nothing remotely resembling the Spanish flu plagues the world. Moreover, some projections call for a continued population decline through the 2020s.  If that does occur, it will be the first 20-year period of population decline in the state’s history.

Art Woolf is a columnist for VTDigger. He recently retired as an associate professor of economics at the University of Vermont.